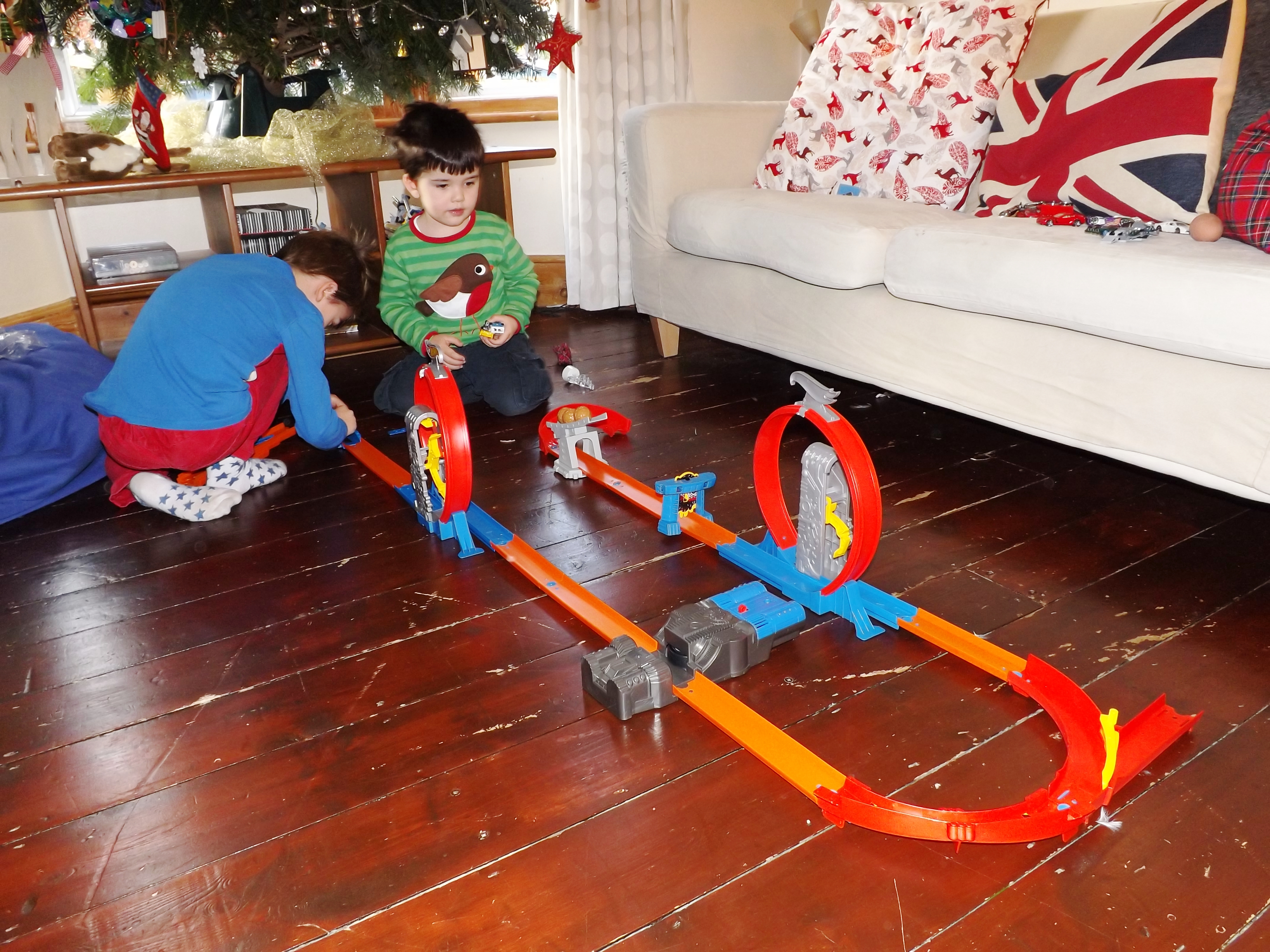 The good people at Mattel are clearly feeling in the festive spirit, as they asked the boys and I if we’d mind reviewing not one but TWO new Hot Wheels sets. Given that my oldest is an utter Hot Wheels fanatic, I wasn’t about to say no – so that’s exactly what we’ve done!

I hope you’ll forgive me for combining them both into one review – whilst they’re definitely very different sets, they have already merged into one set in my kids’ bedroom (ah, the beauty of the ‘track builder’ system!) so I’m having trouble telling them apart already! :D Here’s what I do remember though:

We tackled this one first, mainly because it was the one that Freddie has excitedly torn-into when it arrived. It’s also a floor-based set, adding the extra benefit of being able to set it up wherever you want in the house.

The set itself is pretty simple to set up (once you’ve sent the children behind the sofa, to retrieve the pieces they flung under their by accident) and kept the children entertained for a good few hours.

As well as a pull-back launcher to set the cars on their merry way, the course contains two impressive 360-loops (with added “boosters” to keep the car going) as well as a battery-powered booster to give them an extra kick.

A couple of other features see boulders being launched onto the course after the car whizzes past and a rubber-band-powered projectile which shoots into the air – don’t ask me why, I assume that happens a lot in the racing world!

As you can see, the set went down very well with both boys – who are still playing with it right now, as I write this!

You can find out stockists and current prices (it’s listed as £39.99 at the time of posting) on the Hot Wheels website.

We came to this one second, in part because it looks more complicated but also due to the requirement of a wall to attach it to – something which is a rarity in our current house! Once we’d found a suitable spot (thankfully, in the kids’ bedroom!) we set to work on the construction phase.

As it’s a wall-mounted set, it took a little longer to put together – and it’s definitely one for the grown-up to supervise, if not manage completely – but once we’d figured out all the pieces it was quite a sight to behold – as you can see from my photos.

Like the previous set, it comes with a battery-powered booster to supply the cars the necessary speed to get up the wall (at a quite-amazing speed, I might add) as well as a number of adjustable parts which can force the cars onto different routes – and presumably to engineer the inevitable crash which most kids will be gagging to see.

Once you get past the inevitable noise (probably exacerbated by our wooden floors and echoey house!) it’s another very entertaining set – and it has kept my two entertained for many hours since.

The beauty of the current Hot Wheels sets is, you can join them together to make even bigger tracks – something my two boys are doing right this second above my head. Each track comes with entry and exit points which allow you to create as long a track as you can engineer – we’ve now got at least 4 different sets, so I expect a mega-track is only hours away!

The Super Loop Chase Race is currently listed as £44.99 and you can find all the details you might need on the Hot Wheels site.