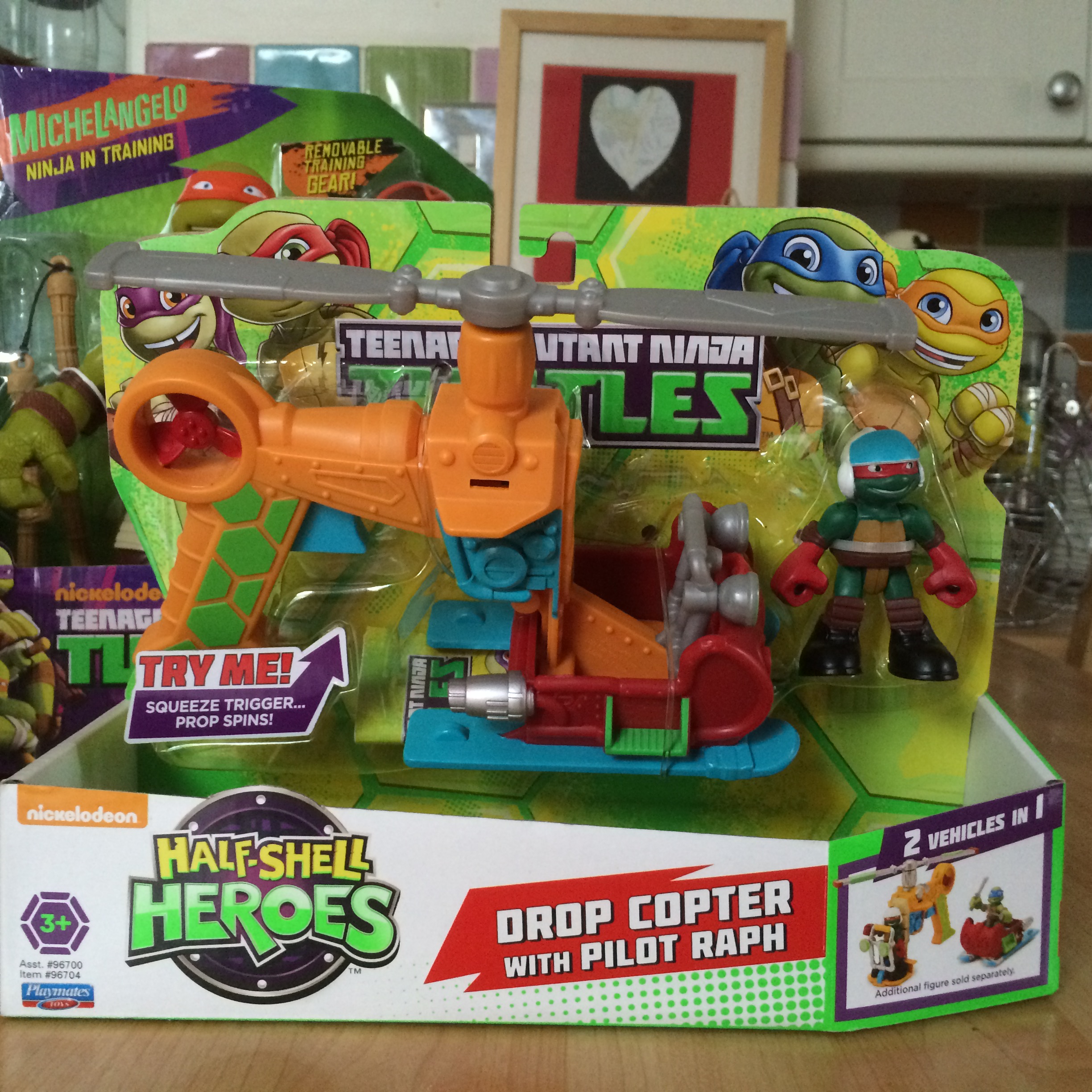 As with most of my reviews, I should probably start this particular one with a disclaimer: I don’t pretend to be a consumer champion, an expert reviewer or (as you can probably tell) a genius wordsmith.

To be honest, I’m not even sure why people bother to ask me to review stuff. But ask me they do, and since I like playing with new things (ahem – sorry, since my KIDS like playing with them…) I usually say yes.

The Nickelodeon people took their lives in their hands and asked us to review some Teenage Mutant Ninja Turtle toys, to celebrate the launch of the new series of the TV show. And we said yes, obviously.

I should probably have pointed out to them that my boys have never actually SEEN the TV show – or indeed any incarnation of the turtles. But some how they seem to know who they are and what they do (Thank you, playground!) and so both were keen to give them a go.

We were sent two particular models, both of which were age appropriate for the boys. Freddie got a little, cartoon-like Turtle (that seems odd to say, given they ARE cartoons – but you know what I mean, right?) with a helicopter thing. Robert got a MASSIVE turtle with some sort of Ninja helmet and a bunch of turtle accessories.

They’ve been playing with them for a couple of weeks now, and both are still in circulation, if you will – still being played with, unbroken and still raising a smile.

I’m not really sure what else I can tell you about them, to be honest. If your kids like the Turtles, they’re BOUND to like these – because kids like most toys, if you offer them the opportunity. Right?!

The big turtle is amazingly heavy for some unknown reason – I’m assuming they do that so it can stand up unaided, but I did wonder what sort of bump it would leave if your child decided to use it as a weapon. The little one doesn’t have that problem (though he manages to stand unaided!). Both are well-made (I even playfully tried to pull an arm off, just to see what happens – nothing!) and have a LOAD of “points of articulation”.

That’s pretty much all I can say really – my kids like them, and both are now keen to see the Turtles TV show, which I guess is marketing in action!

If your kids like the Turtles, go buy them some toys. If they don’t, get them an ice cream or something. Figure it out yourself – I can’t do your job for you I’m afraid.