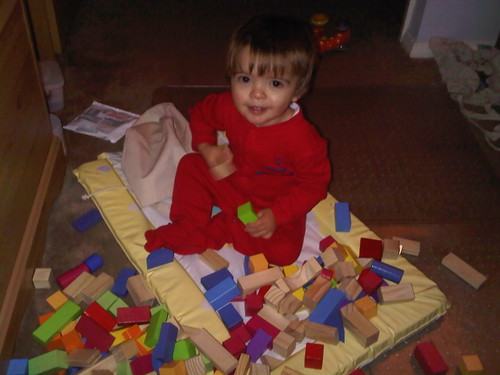 My Year in Photos – January 29th, originally uploaded by henweb.

At the end of what has been a pretty fecking tiring week, I was pleased to come home and find that Robert was feeling much better, so much so that when I walked in he was treating his mum as a trampoline. For those not following my updates, we took Robert to the doctors yesterday to be told that he had not one but TWO ear infections, a bad bout of conjunctivitis, a cold and the ongoing teething issues. Hence why he’s been a bit of a grump lately. Having got him a variety of medicines and remedies, he seems to be on the mend now. I took this photo at about half seven, when he’d normally be fast asleep, but had decided he wanted to play with bricks instead. Having put up with him being grumpy all week, it was just nice to see him being so perky!