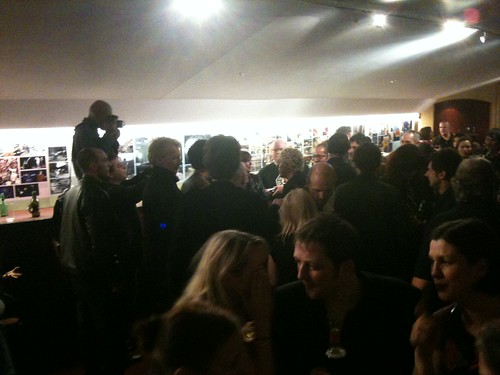 My Year in Photos – March 24th – “Roger WHO?”, originally uploaded by henweb.

Tonight I was lucky enough to have tickets for the first major Suede gig since 2003, when the band split up. Reforming exclusively for the Teenage Cancer Trust, the boys were performing a retrospective of some of their greatest songs to a sell-out crowd in the Royal Albert Hall.

Not only was the gig itself BRILLIANT (see below for a video), we all had our names down for the aftershow party as well. Admittedly the amount of celeb-spotting to be had at the party was pretty limited – I spent the first twenty minutes trying to figure out who one particularly gigantic fella was (turns out it’s TV producer and presenter Richard Osman – brother of Suede member Matt Osman).

But there seemed to be a ripple of excitement when the fella you can JUST about see in the photo above walked in – turns out it is Roger Daltrey, of ‘The Who’ fame… I must admit I didn’t actually recognise him myself, and actually got mildly less excited when I realised it WASN’T Timothy Dalton from James Bond. Hey ho, I’ve never claimed to be a musical genius…!