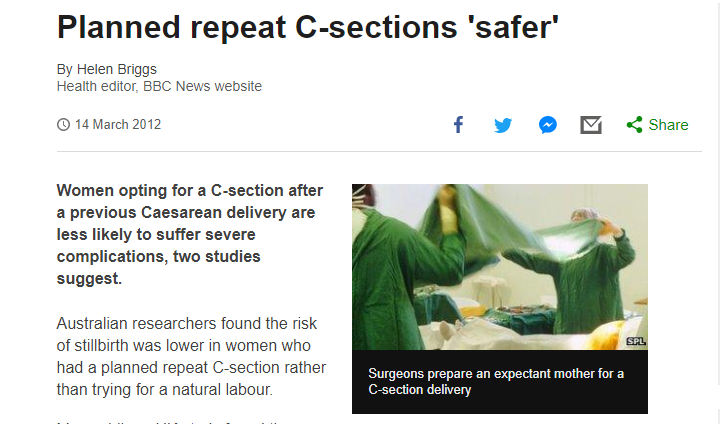 Back in June 2011, just one week before Freddie was born, I wrote a post about the curious subject of “VBAC” – aka “Vaginal Birth After Caesarian. If you didn’t read it back then, you might like to quickly now before I go on, as things have taken an interesting turn this week:

Fatherhood²: “VBAC for good” and other strange things

So, for the uninitiated, the NHS generally recommend that mums who have previously had a Caesarian birth and are pregnant again should TRY to give birth naturally. Despite a lot of stories about the risks of ruptures, tears and muscle damage, the natural method is pushed VERY strongly by most doctors.

Well, studies released this week seem to have opened the debate once more, which I’m very pleased about. You can read the entire story on the BBC website here – “Planned repeat C-sections ‘safer’” – but here’s a quick summary of the story:

Australian researchers found the risk of stillbirth was lower in women who had a planned repeat C-section rather than trying for a natural labour.

Meanwhile, a UK study found the chance of womb rupture was reduced when mothers had an elective repeat section.

But risks are low for both natural birth and Caesareans, say experts.
[…]
The current UK guidelines state that women should be able to choose after discussing the issue with their doctor.

So it looks like the debate might not be quite as cut-and-dry as the natural birth champions would have you think.

I should probably point out for those who don’t follow this blog regularly, Freddie (baby number 2) WAS born “naturally”, and Sara didn’t seem to suffer any medical consequences – though we were quite annoyed that we were never really given the option to choose, and were steered very heavily towards the natural birth.

Apart from the outcome of the research itself, the coverage of the news lead me to another interesting fact – apparently UK “guidelines” state that women SHOULD be able to choose. This is very clearly not what happened to us, and from what I heard after I posted the original story, it wasn’t the experience of other parents either. Just like midwives will always encourage you to breastfeed if possible (another issue very close to our heart – if you’ll excuse the pun) it seems that doctors prefer natural births too.

To be fair to the other side of the argument, there are some clear reasons why doctors especially would prefer natural births – not least of all because it’s a lot less reliant on staff and surgeons than a natural birth, which can often be carried out by a team of midwives alone. But I’m not arguing that any mother should be given the choice, just that women who have previously given birth by c-section should at least be TOLD that it’s an option for them.

I’ll be following the research and it’s follow-up very closely over the next few years, but I’m always very interested to hear about the experience of other parents in the same situation – do let me know in the comments if that’s you!

2 thoughts on “Fatherhood²: V-BACk to That Old Chestnut Again…”