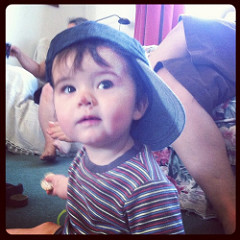 Before finally arriving on the topic of today’s (probably very short) post, I was intending to write another Father’s Day Gift post, like I did last at Christmas – i.e. what the man in your life really wants this Christmas. Unfortunately, my fellow fathers seem a lot more reluctant to speak their mind on Father’s Day gifts than they did at Christmas.

I literally drew a blank when asking around – all I got were the classic answers, like “All I need is the love of my children”, blah blah. I suspect the scale of a Father’s Day gift is a lot smaller than Christmas, so people are wisely weary of even hinting a desire at what they’d like – so I decided to draw a proverbial line under that idea, and move on…

With June now upon us, Sara and I face the prospect of not one but two birthdays to sort out. I’ve talked about birthdays on a few occasions now (Fatherhood²: Birthday Parties for Kids – How Much Effort is Just Enough?; Fatherhood²: A £50 Birthday Card For Your Son? Priceless, Apparently!) , but this year presents us with a new issue we haven’t faced before: Namely, what to get Freddie for his first birthday.

Now this doesn’t sound like a big issue I know – after all, Freddie at 1 seems like a pretty easy little guy to please. But my quandary runs a little deeper than that – and probably makes me look a little stingy too!

Essentially, while looking around for birthday presents for the boys, we’ve been struck by how hard it is to find something we can get for Freddie that we don’t already have in the garage from when Robert was that age, ready to give him when he reaches the right age.

Stacking boxes? No point, got some already. Model cars? He already plays with Robert’s, and any new ones would go straight in to the communal pile! Garden toys? Got a garage full already. We were scratching our heads quite considerably.

Robert is obviously a lot easier to buy for – he’s got a birthday list as long as your arm, and the only problem we’re facing is managing his expectations that he won’t be getting everything he asked for. But Freddie will be getting a much more sparse pile of presents this year!

We’ve ended up getting him a little slide for the garden, and a car park for some cars (which he inherited from Robert!) – both of which Robert will probably get just as much pleasure out of. But if you’re a a relative of ours reading this, wondering what to get Freddie, you’re going to be out of luck asking me…!

As always, I’m very interested to hear about the experiences of other parents in this issue – particularly those with two or more children. So leave me a comment below and maybe I’ll feel a little less guilty! :D

1 thought on “Fatherhood²: What do you get the child who has (inherited) everything?”