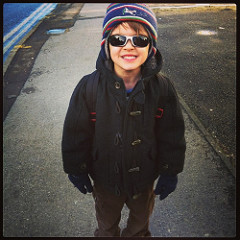 Those of you that have been reading this blog for a while (or indeed those of you related to me!) will know that both of my sons have had issues with their mouth/throat area. Both Robert and Freddie were born tongue-tied – something which we managed to rectify with Freddie (Read: “Fatherhood²: To the Hospital We Will Go… aka “I feel so tongue-tied”” if you want to get up to speed there) but which we seemingly caught too late with Robert, and have yet to resolve.

For the past 6 months or so we’ve been taking Robert on a variety of visits to various hospitals in our area, with the aim of finding out what can be done about Robert’s oral issues. That is to say, we’ve been referred to a few different specialists to analyse the issues – we’ve not been doorstepping the NHS!

Anyway, here’s a quick run-down of the issues:

Whilst we weren’t sure whether any of these things were connected, the doctors we were seeing clearly saw some connection, as one of the things we were asked to do was record some video of Robert snoring – something which wasn’t a problem, to say the least.

Anyway, today Sara took Robert for what proved to be the most impactful hospital check-up so far – having looked at his X-rays, watched the video and generally assessed the situation, it has been decided that Robert will be heading in for a night at the hospital this summer, where he will have his adenoids, his tonsils AND his tongue-tie removed. Ouch!

Whilst we’re certainly relieved that a solution is in sight, this obviously opens up a whole new can of worms for our little family. The biggest question, of course, is how shall we manage this process with Robert? We’re pretty sure that we’re not going to tell him any of the gory details at this stage – possibly at all – but it’s going to be hard getting the whole thing done without him getting scared. I remember when I went in to hospital for some oral surgery back when I was 12, and I had nightmares about it all for weeks before – so I dread to think what a 4-nearly-5 year old will be imagining.

Obviously I’ll keep you all posted as to what goes on a little closer to the time, but I’m interested to hear advice from anybody who has been through their own junior-surgery adventures. Are we doing the right thing by keeping Robert in the dark, or should we take a different approach? Let us know!

2 thoughts on “Fatherhood²: A Hospital Stay on the Horizon”