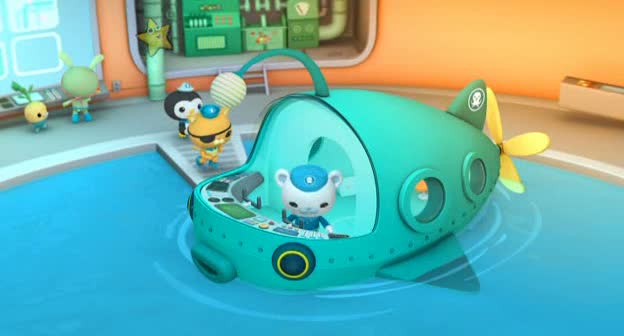 As you’ll know if you’re a regular reader of my blog, The Octonauts are extremely popular in our household. With the US launch of the show happening this week on the Disney Channel, I thought now was a good time to celebrate our favourite kids TV show with a bit of a fun quiz.

So without further ado, here are 40 questions – some easy, some a little more difficult, some only for the die-hard Octo-fans amongst us…

Q1 What is the three-word mantra of the Octonauts?

Q2 How does Peso help to relieve Captain Barnacles when he gets stung by the Jellyfish?

Q3 How many legs does the Gup D have?

Q4 Which creatures guard the spyglass sought by Kwazii on the shipwreck?

Q5 What type of Anemones are at war in the “Enemy Anemones” episode?

Q6 Which Octonaut originally bought the team together?

Q7 What ailment is the Albino Humpback Whale suffering from when the Octonauts meet him?

Q8 How does the Snapping Shrimp manage to create the deafening sound which stuns the Octonauts?

Snapping a bubble between it’s claws

Q9 When the Octopod loses power, how does Captain Barnacles sound the Octo-Alert?

Q10 What “zone” of the ocean does the Angler Fish live in?

Q11 Which of the Octonauts gets trapped inside the giant Comb Jelly?

Q12 What is the name of Peso Penguin’s little brother?

Q13 What type of fish become trapped in the Octopod’s waterworks when they become scared of Kwazii and the Gup-B?

Q14 What colour seaweed do the Marine Iguanas prefer?

Q15 How is the rarely-seen Gup F powered?

Q16 What are the names of the three Blobfish Brothers?

Q17 When the Gups go rogue on auto-pilot, which fish helps to rescue them – with the help of the Gup F?

Q19 On which eye does Kwazii wear his eyepatch

Q20 What do the Octonauts break in to the Walrus colony to retrieve?

Q21 Which of the Octonauts tend the Octopod’s garden pod?

Q22 What is the name of the annual penguin triathalon that Peso competes in against Hugo?

Q23 What fish is the Gup-A designed to resemble?

Q24 What is the name of Professor Inkling’s nephew, as featured in the Christmas episode?

Q25 Which of the Octonauts is a trained engineer?

Q27 Which creatures help to rescue the stranded Orca when it becomes beached?

Q28 What adjustment is added to the Gup B to catch up with the Flying Fish?

Wings and a Pectoral Fin

Q29 Which of the Octonauts appears to be the only one who can understand the Vegimal’s language?

Q30 Which creatures help to rescue Shellington when his cave-diving guide-line snaps?

Q32 What is the only creature Kwazii is known to be scared of?

Q33 Which two creatures are used to illustrate the concept of Symbiosis?

The Crab and the Urchin

Q34 What is the name of Kwazii’s pirate grandfather?

Q35 What type of fish do Kwazii and Peso encounter walking on land?

Q36 In the original American-released books, what was Dashi Dog previously called?

Q38 What does the Kraken-esque “monster” described on Kwazii’s “Monster Map” turn out to be?

Q39 How many Gups were there in the first 2 series of the show?

Q40 What musical instrument do the Octonauts use to entice a pack of Beluga Whales out from under the ice flow?