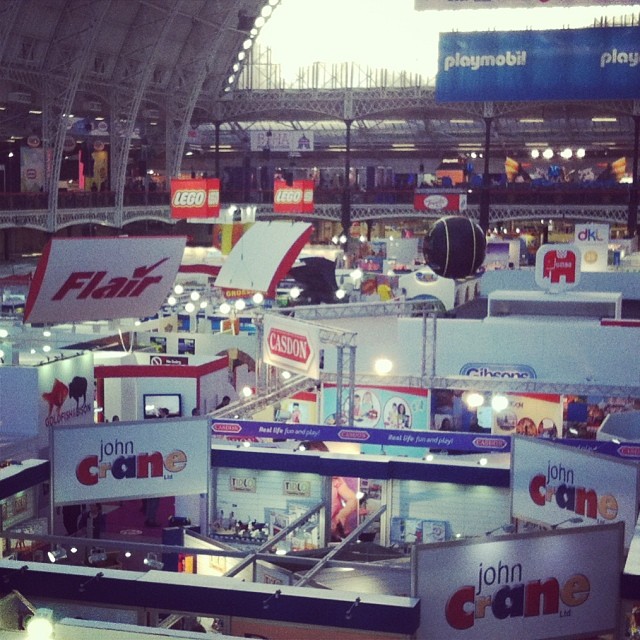 Today, one of my long-held childhood dreams proved to be a crashing disappointment.

Let me explain… Ever since I was a child, I’ve harboured dreams of attending a “Toy Show”. I remember watching a report on BBC Newsround from one of these shows, over twenty years ago, and thinking to myself “God, I bet it’s bloody amazing there!”.

Naturally, as a child I never got to realise this dream.

As I grew up (though some would say that’s arguable), I somewhat forgot about toy shows. Technology shows like CES replaced that dream, though whenever I’d see a story or report from a toy show, I’d find myself yearning for that old dream.

So it was with some excitement that I was told last week I would be attending a meeting with a client at London’s own Toy Fair. I should probably point out that this client isn’t a toy manufacturer, but they had a good reason to be there and I certainly wasn’t going to refuse – so I booked my (free) ticket and began to get excited.

Well, today was the big day, and my excitement was peaking – even more so (if possible!) when I discovered that Lego themselves would be exhibiting at the show. I armed myself with business cards (after all, who DOESN’T want to have a toy company on their books?!) and headed to Olympia.

With my meeting delayed, I got a good chance to look around the show – and it was at this point that I realised I’d perhaps built this thing up a little too much – probably not a surprise after twenty years, but still somewhat of a shock.

Naturally, the first stand I headed to was Lego – a MASSIVE enclosed stands, completely covered in hoardings for the upcoming Lego movie. “Can I help you sir?” said the nice lady at the desk. “Yes please, I’d love a look around!” I replied, excitedly. “I’m sorry, it’s appointment only I’m afraid – this is a closed stand”. Oh. Bugger. A few minutes of shameless pleading ensued (I’ll spare my blushes by not documenting it for you here) before I eventually walked sullenly away.

It turns out (I found out, by sneaking a look through several of the hoardings) that the sets on display included several top-secret sets. I managed to catch a glimpse of several new Star Wars models, a box for ‘Avengers Assemble’, several for ‘X-Men: Days of Future Past’ and even one for ‘Guardians of the Galaxy’ – so in hindsight I can see why they didn’t want any old Joe wandering the stand with their smartphone and the WordPress app fired up. But that didn’t stop it being a very disappointing realisation – the first of many.

As I picked myself up off the proverbial floor, I decided to wander the rest of the show – surely there must be lots more exciting stands to see? Well, I wasn’t wrong – there were defintely LOTS of stands to see. Hundreds in fact – displaying almost every toy known to man. But it was at this point that I came across my next disappointment. Namely:

About 90% of the toys on display were the same ones I’ve seen so many times in the shops. When you think about it, a lot of the toys you see on sale at your local Toys R Us (other retailers are available!) haven’t really changed much since you were young. Scrabble for instance, or Connect 4 – both pretty much the same as when I was 5.

Sure, there are lots of new toys, or variations on old toys – but by and large, the majority of the wares on show weren’t that much more exciting than I could see on a regular (and admittedly, usually quite exciting) trip to a local toy shop. Since I’m a dad now, I go to toy shops all the bloody time – so none of this was much of a thrill for me. I expect my 5 year-old self might have been a smidge more excited, but not much.

The final thing I realised, as I wandered the floor (and gallery!) of the Kensington Olympia, was that I wasn’t going to get ANY freebies. Not a sausage. Which is pretty crap really, considering almost every other trade show I’ve attended (and believe me, I’ve been to boring amounts) will laden you with freebies – even if it’s just cheap stuff like pens or corporate toys. But did the corporate giants of the toy world shower the attendees with toys? No. No they didn’t. Which was a crushing blow for me.

I should probably point out, for fairness, that I suspect I’d have been showered with a LITTLE more love if my badge had said “Henry Elliss, Head of Purchasing at Argos” (or the equivalent). But as it was, I got diddly-squat.

Oh, I did see Sooty though. So it wasn’t ALL hopeless…

Thankfully, my meeting went well, so I didn’t leave completely disheartened. But I’m certainly feeling like I need to reassess some of my other childhood dreams now, to decide whether I need to let go of any more.

After all, there’s no point me maintaining this peak physical condition if the astronaut program isn’t going to be all it’s cracked up to be…

1 thought on “Fatherhood²: Let’s All go to the Toy Fair! or ‘Another Illusion Shattered!’”